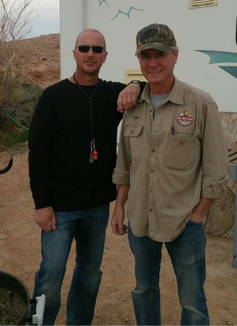 Brad Norton began his interest in dog training in the late 90’s after meeting Dan Hosford when looking for a trainer for his out of control Labrador puppy. Dan is a highly sought after competitive gun dog trainer. He has been educating dogs and owners alike, to the highest possible levels, for some of the most difficult competitions in the K9 world for over 4o years.
​
“After working with Dan and his dogs for a few months I was hooked.” Says Norton. Dan Hosford realized Norton had a natural relationship with the dogs and their owners, so he took Norton under his wing and taught him to work with dogs. Norton traveled the country with Hosford for the next 8 years training and competing with dog after dog, expanding his education, as he met and trained with many of the best from all over the country.
In 2008 Brad moved back to Las Vegas where he soon realized gun dog training grounds were not of great abundance.
After speaking to dog owners throughout the city, Brad realized the greater population of dog owners are suffering from a simple lack of obedience training for their four legged friends. Brad spent the next few years teaching dogs and owners obedience and developing a solid program that works for every dog.
Over the next few years, Brad explored detection dog training for security police. Teaching dogs to use their nose was a base of gun dog training, so this type of work fit right in. It was educational and fun but the world is saturated with detection trainers.
​
Looking for areas where he could make a positive impact. Norton found a need for good Service dog and Therapy dog trainers. Norton continued to develop methods to meet these needs. Today, Norton specializes in Therapy dogs, Facility Therapy dogs and Service dogs including Diabetic alert dogs and wheelchair assistance dogs.

Norton now has Facility Therapy dogs in many schools throughout Las Vegas. These dogs do amazing work with the students and faculty in these schools. 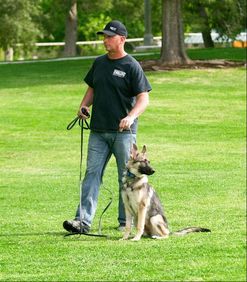 ​Norton knows that a well-trained dog lends itself to a quiet, peaceful, stress free environment. People always say to me, “I really love my dog, BUT….” he’s jumping on everyone, he pulls me on a leash, he runs away off leash, I wouldn’t dare take my dog to the park, I think he’s hard headed, he’s not all there.” All of these things stem from a lack of obedience and leadership. Your dog does not speak English and you don’t speak dog, however through a solid obedience program you can learn to communicate clearly with your dog and expand your relationship to endless bounds. Hosford use to say something all the time that really stuck with Norton over the years. “Rarely is the dog the problem. It is almost always the owner.”

This has come to be so true. “I have never met a dog yet that would not or could not be trained.” Says Norton. Norton has learned that the dogs will always learn if given a clear and concise program to follow. We humans like to make things a little more complex with questions and ideas of our own. Dogs are much more simple.
So over time, Norton has mastered the ability to train dogs and educate owners so they may continue the training throughout the dog’s life, thereby maximizing the dog / owner relationship. ​​
Contact Us
NORTON DOG TRAINING © COPYRIGHT 2016. ALL RIGHTS RESERVED.